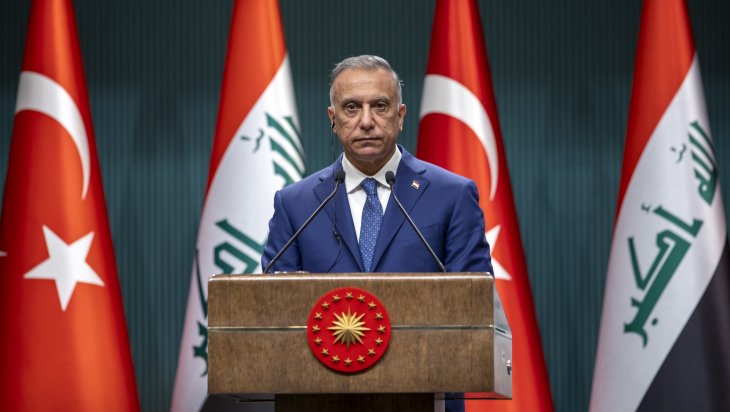 Iraqi Prime Minister Mustafa al-Kadhimi, who took office in May 2020, met with President Recep Tayyip Erdogan on 17 December 2020 in Turkey with a high-level delegation. After the meetings between the delegations, "The Treaty on Avoiding Double Taxation of Income Taxes and Tax Evasion" and the "Memorandum of Understanding on Cultural Cooperation" were signed between the two countries.[1] During the visit, it was stated that President Erdogan will visit Iraq and the fourth High-Level Strategic Cooperation Council meeting (HLSC) will be held.

The first meeting of the HLSC, which was formed with the Joint Political Declaration signed in Baghdad on 10 July 2008, was held on 15 October 2009 in Baghdad, the capital of Iraq, and 48 agreements were signed on various issues. The second HLSC meeting was held in Ankara on 25-26 December 2014, and the third HLSC meeting was held in Baghdad on 7-8 January 2017, as part of the visit of then-Prime Minister Binali Yıldırım to Iraq. Although there were mutual visits later, the fourth meeting of HLSC could not be held. The next meeting of HLSC is planned to be held in 2021.[2]

Cooperation on the economy and against terrorism came to the fore as the two most important topics of al-Kadhimi during his visit to Turkey. Although Al-Kadhimi stated that he is open to cooperation against terrorism with Turkey, he avoided naming terrorist organizations hostile to Turkey. While President Recep Tayyip Erdogan has made clear that FETÖ, ISIS, and the PKK are considered terrorist organizations, the Iraqi Prime Minister mentioned only “ISIS and others” in his speech. Hence, it can be concluded that the Iraqi central government lacks sincerity in its fight against the PKK. The Iraqi leadership frames its attitudes against terrorism in constitutional terms as both the Iraqi Prime Minister and the Iraqi Foreign Minister stated, "No organization can harm another state by using Iraqi lands." However, these organizations should be specified clearly.

Although the PKK terrorist organization is a threat to Turkey, it is a greater threat to Iraq. Today, the PKK presence in Makhmur, Sulaymaniyah, and Kirkuk, located between Mosul and Erbil on the Sinjar border, is not a negligible one. The PKK violates Iraq's sovereignty. A senior official from the PUK (Patriotic Union of Kurdistan) confessed that "the events in Sulaymaniyah today are the result of the eternal freedom given to the PKK.” Today, the PKK has become a threat for both the sovereignty of Iraq, the administrative structure in the Iraqi Kurdish Regional Government (KRG), and the structuring among Kurds. For this reason, Iraq should directly declare the PKK as a terrorist organization and take the initiative to fight against it. However, the Iraqi administration is struggling with political instability as well as economic and security problems. Today, there are still members from the PKK's mountain camps in the Iraqi Parliament. This deputy, named Yusra Recep, is the deputy chair of the Iraqi Parliament Security Commission.  The party of the PKK in Iraq, Tevgera Azadi, is still considered a party under Iraqi law. About such matters, concrete steps should be taken to show sincerity in the fight against the PKK.

From the point of view of the KRG, the fight against the PKK is an extremely troublesome process. The KRG domestic public opinion has an attitude toward matters concerning the Kurds in Turkey as well as regional Kurdish issues. Hence, it should be considered that the PKK has a base in the KRG. In this sense, there is public backlash about the changing position of the KRG as a consequence of the KDP and PUK’s changing attitude in the last five years. Iraq became a hub for both the PKK and the YPG regarding Kurdish nationalism. In Iraqi Kurdish public opinion, the KDP or other parties' criticism of the PKK is seen as a Kurdish-Kurdish war and draws a reaction. There was a conflict in Duhok against the PKK which does not allow KRG in the region. PKK-controlled checkpoints harm the KRG’s political authority. On the other hand, the KDP has reservations about confronting the PKK.

If the Kurdish parties in the KRG and KDP want to make a deal with Turkey, they have to declare all sides involved in terrorism as terrorists. After all, none of the terrorist groups operating in Iraq is different from the other. Relevant to this phenomenon, the Sinjar Agreement has a vague clause about the removal of foreign powers from the region. These foreign forces must be clearly defined. Otherwise, it is not possible to find a solution to a terrorist presence in Iraq. PKK members take off their patches and put on YPG and YBŞ patches respectively in Syria and Sinjar.  These groups are no different from each other. They are trying to dominate the region by damaging it in the same way. There seems to be an avoidance of confrontation with this reality in Iraqi as well as American policy. With these steps, neither can Turkey be deceived nor can this issue be resolved in the region. This organization will continue to grow if Iraqi policy remains the same.

On the other hand, it cannot be said that all groups are disturbed by the PKK's presence in Iraq. Two factors must be distinguished from each other before al-Hashd al-Shaabi (the People’s Mobilization Forces). Al-Hashd al-Shaabi has now become an official security force under the Iraqi central government. There are also militia groups acting independently of al-Hashd al-Shaabi. One of the biggest problems for Iraqi security is that Iraq cannot prevent the emergence of these militia groups. This is also a big problem for al-Hashd al-Shaabi. Until today, these militia groups were sympathetic to and have acted in unison with the PKK. The groups support the activities of the PKK in the region during the post-ISIS period by saying that PKK took a stance against ISIS. For this reason, these militia groups support the group established under the name of YBŞ affiliated with the PKK, especially in the Sinjar region. The lack of measures against PKK-affiliated groups remains one of the most crucial problems with the Sinjar Agreement.

On the other hand, Iraq is in search of a balance in foreign policy. Turkey stands out as being one of the neighboring countries for Iraq in terms of this search. Considering Iraq's economic difficulties and service shortages in the country, Turkey can be a role model for Iraq. The presence of the delegation which includes the economy and investment-oriented authorities draws attention. Names such as the Minister of Planning Khalid Batal Najim Abdullah, Minister of Oil Ihsan Abdul Jabbar, Minister of Water Mahdi Rashid Mahdi, chairman of state-owned Trade Bank of Iraq Salem Jawad Abdul Hadi, head of Iraqi Customs Gates Committee Omar Adnan Harin were also included in the delegation accompanying al-Kadhimi. Besides, al-Kadhimi also gathered with Turkish businesspeople at the Turkey-Iraq Business Council- DEIK. All of this can be interpreted as a sign that Iraq considers Turkey as an economically important partner. Such a partnership is important particularly for Kirkuk-Ceyhan Pipeline in terms of oil sales. Besides, the Habur Border Gate has great importance in terms of providing the commodities Iraq needs. Around 2500 Turkish companies operate in Iraq. During the pandemic process, the trade volume between Turkey and Iraq has increased despite the presence of problems such as conflict and oil trade between the USA and Iraq. The trade volume between Iraq and Turkey reached $17 billion as of 2020. By the end of 2020, the trade volume between the two countries is targeted to be $20 billion.

Even minor improvements toward a satisfactory result in the face of so many challenges can be considered a success. This is the most important indicator of economic trade volume between Turkey and Iraq. Reopening the Ovaköy Border Gate, the reconstruction of the Baghdad railway and its extension to Basra, repair of the Kirkuk-Ceyhan Pipeline, and building a parallel line are planned to become the most important issues in terms of the economic relations between Turkey and Iraq for the coming period. At this point, it is extremely important for the relations between the two countries to have a principled structure, stable over time.  Considering that Turkey-Iraq relations have differed especially parallel to the domestic political changes in Iraq, it will be beneficial to separate bilateral relations from daily politics and act on principled and concrete steps for the development of relations between the two countries, as only such an approach will create permanent and strong relations.