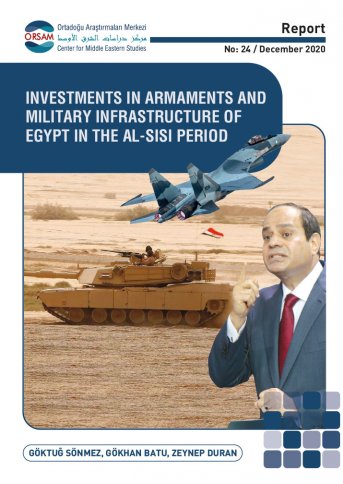 According to the classification made by the "Global Fire Power" in 2020, the Egyptian Army ranks as the 9th most powerful army in the world, going up three levels compared to the previous year. Considering the main reasons for this rising, it can be seen that there are multidimensional moves made to improve the conventional capacity of the army and the arms procurements made under the administration of Abdel Fattah al-Sisi, who took the presidency in 2014, especially after Mohamed Morsi was overthrown by the military coup. In addition to arms procurements, Egypt's policy to reduce its dependence on the United States of America (USA), which has become the most important arms supplier with the change of axis after the Camp David Accords Agreement with Israel, and to diversify its military supplier countries including Russia, European countries and China, stands out as an important strategy that has the potential to affect regional balances. Another important move that should be underlined on behalf of Egypt, is the steps that have been taken to improve its military infrastructure and bases. However, the debate continues about whether all these investments have a holistic effect on increasing the capacity of the Egyptian army and how much it deserves its place in the ranking mentioned, or whether the ranking reflects the real situation.