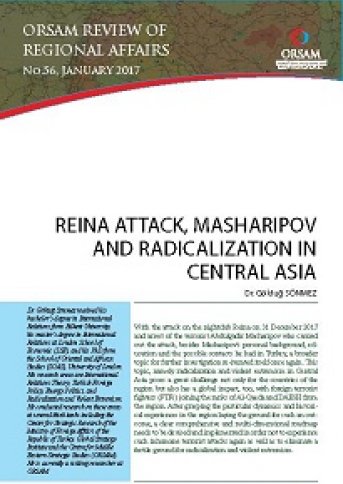 With the attack on the nightclub Reina on 31 December 2017 and arrest of the terrorist Abdülgadir Masharipov who carried out the attack, besides Masharipov’s personal background, education and the possible contacts he had in Turkey, a broader topic for further investigation re-iterated itself once again. This topic, namely radicalization and violent extremism in Central Asia poses a great challenge not only for the countries of the region but also has a global impact, too, with foreign terrorist fighters (FTFs) joining the ranks of Al-Qaeda and DAESH from the region. After grasping the particular dynamics and historical experiences in the region laying the ground for such an outcome, a clear comprehensive and multi-dimensional roadmap needs to be devised and implemented in order not to experience such inhumane terrorist attacks again as well as to eliminate a fertile ground for radicalization and violent extremism.