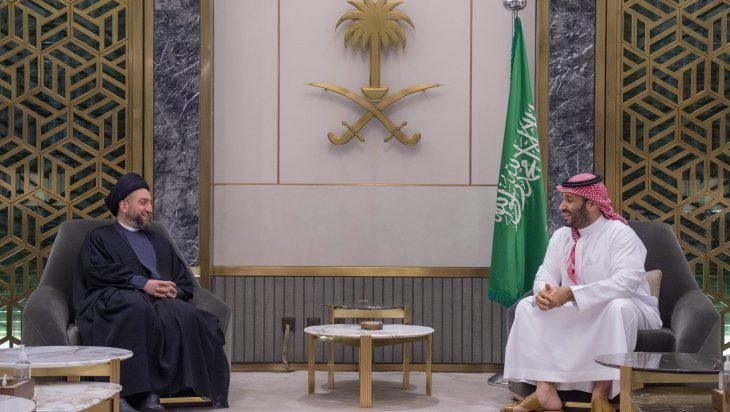 In 2004, the late Saudi Minister of Foreign Affairs, Prince Saud al-Faisal, said in a press statement when he was in Washington to meet with US officials that the US "presented Iraq to Iran on a silver platter". This was the Saudi Arabian view on developments in Iraq just one year after the US invasion of Iraq. At that time, Iran's influence in Iraq was still at  its front end. Later, this influence increased, especially during the period of former US President Barack Obama, who presented Iraq to Iran on a gold platter instead of the silver platter presented by the son of Bush. What is Saudi Arabia's view and assessment of the current situation in Iraq, where Iran and its close Iraqi political armed forces have reached the peak of their control over the country's political, security, and economic decisions?

Saudi disappointment with US policy in post-2003 Iraq
The US way of changing the regime in Iraq made Saudi Arabia very uncomfortable. Saudi Arabia hoped (or perhaps in agreement with the US) that the change would only affect the top of the regime and the top leaders, and that the old military, security, and administrative institutional structures of the Iraqi state would be preserved. Thus, the chaos and security vacuum that facilitated Iran’s  penetration  and its extensions within the country would be avoided. However, the US has dismantled the old Iraqi army and all security institutions, as well as caused major changes and disruptions in the civilian institutions of the Iraqi state. This has served Iran's interests and objectives in Iraq and has also been a disaster for Saudi Arabian interests.

In an interview broadcast by the official "As-Saudiyye" channel in April, Prince Turki Al Faisal, the former ambassador of Saudi Arabia to the United States, stated that, after the regime fell completely in 2004 and the execution of former Iraqi President Saddam Hussein, Prince Saud Al Faisal had a meeting with US Secretary of State Colin Powell in Jeddah. Prince Saud said to Colin Powell: You have finished your mission in Iraq, how about you replace your forces in Iraq with Arab and Muslim forces so that Iraq can stand up and provide security? But, unfortunately, the Americans did not accept this offer".

This disappointment experienced by Saudi Arabia due to the policies implemented by the US in Iraq after 2003 was also reflected in the relations of the Saudis with the new political regime in the country. The relations oscillated between stagnation and tension, and sometimes reached the breaking point.

In the arena of regional competition, Iran has contributed greatly to the continuation of the decline in relations between Saudi Arabia and Iraq. Iran has achieved this thanks to Iran's increasing influence on Iraq's decision-making mechanism after 2003, on the one hand, and its soft power, which has tarnished the image of Saudi Arabia in Iraqi society, on the other. As a matter of fact, after 2003, Iran tried to isolate Iraqi society (Arab and non-Arab) from its regional environment, especially the Shiite Iraqi community in the central and southern regions of the country. Iran did this with the propaganda that all the neighboring countries of Iraq (except Iran) are Sunnis and that these countries have no objection to the old regime's "oppression" of the Shiites in Iraq. Likewise, Iraqi media platforms, identified with Iranian propaganda, focused on the news of suicide attacks and terrorist operations carried out by the Saudis in Iraq in order to turn  Iraqi public opinion against Saudi Arabia. However, they ignored the fact that most of the Saudis who carried out the actions were wanted by the Saudi security services. The exaggerated protectionist policies of the countries of the region, especially the Arab countries, and their unwillingness to interfere in Iraq's affairs after 2003, contributed to Iran's achievement of its goals.

On the other hand, a public opinion formed in Saudi Arabia, led by the religious establishment and influential clergy in the country, rejected the situation in Iraq and opposed the new political regime after 2003. They had shown a rigid approach before King Salman and Crown Prince Mohammed bin Salman came to power in Saudi Arabia. These religious parties believed that Iraq was a country occupied by the Americans and that the new political system created by the Americans in Iraq "repressed" the Sunni Arabs. For this reason, the religious establishment of Saudi Arabia has opposed any governmental rapprochement or cooperation between Saudi Arabia and Iraq. Moreover, the fact that some Saudi clerics issued extremist fatwas denouncing certain elements of the Iraqi people has led many deceived Saudi youths who believed in this to join terrorist acts in Iraq. This situation has also been one of the factors that has caused Saudi Arabia to be reluctant for years to improve its relations with Iraq.

Saudi Arabia's current policy towards Iraq is a balance between realism, prudence, and ambition
As everyone knows, the political and security stability curve in Iraq has been in a continuous decline since 2003 due to various internal and external factors and reasons. The political crisis, which has continued since the last parliamentary elections held in October 2021, has brought  the worsening situation in the country to a grave level. This is the most serious internal conflict in Iraq since 2003. So much so that there have been a limited number of armed conflicts between the parties in the past weeks, and if the parties to the crisis cannot find a solution, the crisis may turn into a major armed conflict. Of course, this will have dire repercussions for  Iraq's current and future economic and social conditions as a whole.

The geopolitical characteristics of Iraq and the great changes in the power and influence centers of the internal and external actors involved in the Iraq problem make it inevitable that Saudi Arabia will be affected and that it will affect Iraq. In no way can Saudi Arabia ignore or stay away  from what is going on in Iraq. In recent years, Saudi Arabia has realized that it is not a realistic option to wait for the conditions in Iraq to become ideal and the country to get rid of Iranian hegemony in order to begin to improve its relations with Iraq, and this will take a long time. Therefore, during the Mohammed bin Salman era, Saudi Arabia adopted new orientations in its relations with Iraq, and we can say that these orientations combine realism, prudence, and ambition.

The realism of Saudi Arabia's current policy towards Iraq lies in its abandonment of the old "idealistic" rhetoric, which is content to attribute and complain about Iraq's deteriorating conditions to US mistakes and Iranian intervention. Saudi Arabia has adopted a new "pragmatic" discourse on Iraq, hoping to improve its conditions in Iraq and to establish relations of common interest between the two countries. Saudi Arabia has started to deal with the Iraq issue with the understanding that blaming the Americans has become useless, that Iran's role in Iraq is well known, and that "what happened in Iraq has happened and can no longer be prevented, but the damage it caused to Saudi Arabia can be reduced". Saudi Arabia has decided to focus on the current conditions of the country, according to the centers of power and influence within the country, within the framework of the rule of "obtaining what can be achieved". In this context, we see that Saudi Arabia already has good communication channels with the Iraqi government and various Iraqi political forces and personalities. Particularly, the steps taken by Mohammed bin Salman to rein in the extremist religious discourse in Saudi Arabia and the sectarian propaganda brought to  the agenda by Iran-backed parties against Saudi Arabia in Iraq are  diminishing.

The failure of Saudi Arabia to give a strong response after information and press reports showing the involvement of Iranian-backed Iraqi militias in the drone attacks on Saudi Aramco oil company facilities in September 2019 clearly demonstrated the realism in Saudi Arabia's policy. Because Saudi Arabia understands the internal and external challenges before the current Iraqi government. It is also aware of the limited control over the issue of the proliferation of  arms and the security situation in the country beyond the control of the government.

The cautious approach in Saudi Arabia's policy regarding the situation in Iraq has three dimensions: security, economic, and social. In the field of security, Saudi Arabia stands on the alert against the actions of the Iranian-backed militias that will threaten the security of Saudi Arabia. In addition, Saudi Arabia supports the development of cooperation and mutual assistance between the Iraqi militias and the Houthi militias in Yemen to undermine Iran's military efforts in Yemen. Recently, Iraqi media platforms close to Iran have started to report on the visits of the Houthi delegation and its leaders to Iraq and their meetings with Iranian-backed Iraqi political parties.

What is certain is that Saudi Arabia monitors and takes into account all these security threats. Saudi Arabia's caution in keeping the channels of communication open with the Iraqi government and other Iraqi parties is shaped within the framework of preventing possible dangers.

On the social dimension, Saudi Arabia focuses on protecting against sectarian rhetoric and provocative actions that could disrupt the stability and cohesion of Saudi society. As a matter of fact, some religious and political parties in Iraq direct these sectarian slogans and provocative rhetoric towards those living in the eastern region of Saudi Arabia, most of whom belong to the Shiite sect. After 2003, Shiite religious movements and institutions from all over the world, from Gulf countries and Africa to Asia, opened offices and representations in Iraq. Some of these movements are in opposition to the ruling regimes in their countries, and Iran supports and encourages them.

Despite serious concerns about the situation in Iraq, Saudi Arabia remains true to its passion. Perhaps this passion is the passion of most countries in the region that want "honest" relations with Iraq. This passion is the desire to save Iraq from foreign intervention and to ensure the solid security and political stability that will enable the economic development wheel to turn in this country. Thus, it will pave the way for the countries of the region to establish cooperation relations with Iraq on a win-win basis. Within this framework, Saudi Arabia has announced that various agreements and strategic economic projects have been made with Iraq in recent years. Saudi Arabia knows very well that most of these projects will be blocked by Iran and by parties that oppose any political or economic activity by  Saudi Arabia in Iraq. However, Saudi Arabia, which is currently trying to do its best and focusing on not giving up its efforts, is determined to maintain this approach in its relations with Iraq. 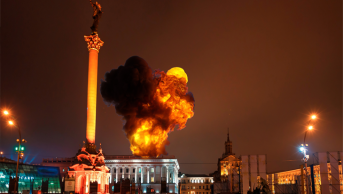 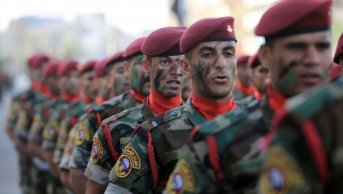 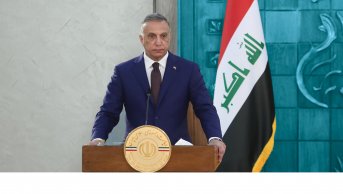