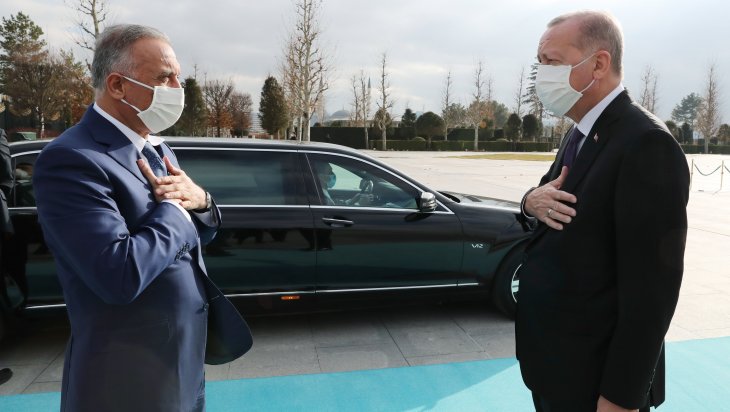 Relations between Iraq and Turkey have seen substantial growth in recent years. Bilateral trade exceeded 20B USD in 2020—despite the economic recession caused by the Covid-19 pandemic, political instability, and volatile oil prices. But although trade has developed at an impressive rate, political ties have not followed the same track.

Turkey’s main challenge in building close ties with Iraq remains the internal struggle between Iraqi Prime Minister Mustafa Al-Kadhimi’s government and the Iran-backed armed groups in the country. Thus, Ankara is forced to carefully work on building relations with Baghdad while keeping the armed groups in check.

Volatility of the First Channel
Turkey’s first channel of communication with Iraq is its elected government, which has had volatile relations with Ankara since the fall of former Iraqi president Saddam Hussein in 2003. While initially hopeful that Sunnis would gain power in Iraq following the US-led removal of Saddam, Ankara ultimately forged tense ties with Baghdad during the administrations of pro-Iran Shiite prime minister Nouri al-Maliki (2006-14). Turkey’s desire to fill the power vacuum caused by the US withdrawal from Iraq in 2011 and its efforts to develop relations with Iraqi Kurds further strained Ankara's relations with Baghdad. Maliki's aggressively anti-Turkey and anti-Sunni policies, moreover, further pushed Ankara to strengthen its relations with the Kurdistan region of Iraq (KRI).

Maliki’s successor, Haider al-Abadi (2014-18), continued the antagonistic approach towards Ankara at the beginning of his administration. The emergence of the Islamic State group (IS) added fuel to the fire, as the deployment of Turkish soldiers to the Bashiqa military base near Mosul in northern Iraq in Dec. 2015 escalated tensions between the two countries. Indeed, both the Iraqi and Iranian governments have protested that the Turkish military has no mandate to enter Iraq. However, the KRI’s independence referendum in 2017 caused Ankara to pivot away from Erbil and back towards Baghdad. The shared disapproval of the referendum played a significant role in restoring Turkey’s relationship with the Iraqi government.

Bilateral relations have warmed significantly ever since. In 2018, Ankara pledged 5B USD to Baghdad for reconstruction at a conference in Kuwait. In turn, reciprocal visits that increased over the course of the Abadi administration and that of his successor Adel Abdul-Mahdi (2018-20) have peaked under Kadhimi. Although ties between Ankara and Erbil improved soon after the failed independence referendum, Turkey demonstrated its preference for Baghdad by emphasizing Iraq’s territorial integrity at every opportunity.

Despite the better relations between Baghdad and Ankara, Iraq’s political instability has prevented these ties from solidifying. Iran-backed Shiite politicians and armed groups in Iraq affect decision-making mechanisms, as well as create an area of tension among regional powers. Although the stance of Kadhimi—who prioritizes Iraq’s sovereignty and aims to lessen Iran's influence—aids Turkish aims, the continued influence of Iran-backed forces narrows Turkey's long-term scope of action.

Competition with the Second Channel
While Ankara has established good relations with the current government in Baghdad, its relationship with pro-Iran forces in Iraq is hostile. These armed groups—the second channel in Iraq—are seeking to prevent Turkey's efforts to legitimize its military presence in the country through diplomatic efforts with both Erbil and Baghdad. In addition, these armed groups do not appear to want any foreign country to make any move inside Iraq without permission from Iran. The missile and drone attacks on US and international forces are clear examples of this wish. And while not claimed by any group, the recent Apr. 14 attack on the Bashiqa military base sent the same message against Turkey’s political, military, and economic presence in Iraq. The also attack further underscored that the threats against Turkey have shifted from being rhetorical to real action.

Any Turkish attempt at building a relationship with Iran-backed armed groups is certain to worsen ties with Baghdad. Yet, the reality is that the US-led invasion of 2003, Maliki’s 8-year administration and the emergence of IS have all led Iran and the forces it backs to acquire a large role in Iraq. The importance of Iran-backed armed groups in the fight against IS particularly allowed their support on the ground to grow. Iraq’s official recognition of the Popular Mobilization Units (PMU), the umbrella organization controlled mainly by pro-Iran armed groups, further consolidated Iran’s influence over the Iraqi security apparatus.

The fact that Iran-backed forces made huge gains in Iraq’s parliament following the 2018 elections has also increased Iran’s impact on the Iraqi political scene. As a result, Turkey’s quest to expand its political, diplomatic, and economic influence in Iraq has been slowed.

Despite this setback, Turkey recently fortified its military bases and increased its operations in northern Iraq against the Kurdistan Workers’ Party (PKK), a group that Ankara considers to be a terrorist organization. Furthermore, Ankara firmly supports the deal signed between Baghdad and Erbil in Oct. 2020 that seeks to "restore stability and normalize conditions" alongside removing PKK and PMU forces from Sinjar -a district of the Nineveh Governorate in northern Iraq. Turkey stated bluntly that it would never allow Sinjar to become a “second Qandil,” referencing the Iraqi border region that serves as PKK headquarters.

Of note, the close relations between the PMU and PKK in Sinjar are no secret. While the Sinjar Resistance Units (YBS) deny any organizational linkage with the PKK, many observers refer to them interchangeably. Against this backdrop, YBS members who receive salaries from the PMU are reportedly sharing such income with other non-PMU members.

Meanwhile, the Iran-backed Asa'ib Ahl Al-Haq (AAH) has threatened to fight Turkey if Ankara were to make a move in Sinjar. Iran's Ambassador to Iraq, Iraj Masjedi, moreover, criticized Turkey in February for violating Iraq's sovereignty. Yet the harsh rhetoric of pro-Iran forces in Iraq must be understood in the context of the ongoing rivalry between Ankara and Tehran on other foreign policy matters, including Syria and Azerbaijan.

A Delicate Balance
While the post-2003 governments in Iraq have been weak and unstable, the deeply-entrenched armed groups continue to be the main determinant of Iraq's relations with other countries. Turkey, therefore, should be aware that although relations with Kadhimi’s government are temporary, ties with Iran-backed groups appear to be for the long haul.

Ankara must balance these sides by developing relations with all of Iraq’s communities: whether Sunnis, Kurds or Shiites—including top Shiite cleric Grand Ayatollah Ali Al-Sistani. Meanwhile, Turkey can use its relations with Iran in order to limit Tehran-backed political and armed groups' negative effect on Ankara-Baghdad relations, knowing that Iran has ultimate power over these groups.

However, since Iran has been in a regional rivalry with Turkey, the idea of attempting to limit these groups with Tehran's help might not pan out. Furthermore, by engaging in backchannel-diplomacy with the leaders of Iran-backed political and armed groups, Ankara could set up another limited path to circumvent crises with less damage.

This article was published in Amwaj Media  website under the title of “Turkey-PMU tensions mount as Ankara engages with Baghdad” on May 19, 2021.