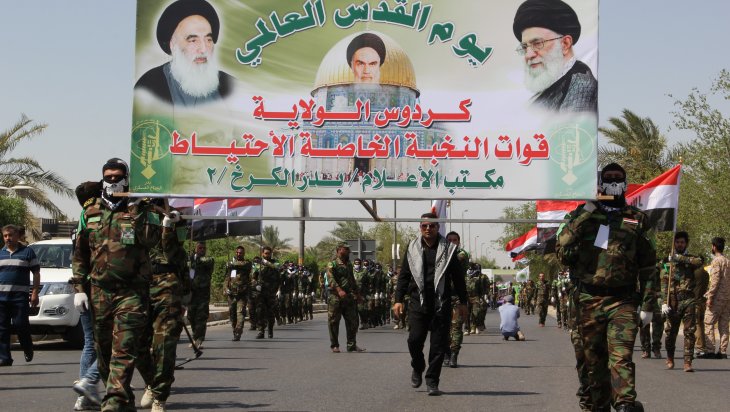 On 18 March 2020, it was claimed that the militia groups affiliated with Iraq’s top Shi’a cleric, Grand Ayatollah Ali al-Sistani, had been separated from the Shi’a militia umbrella group, the Hashd al-Sha’abi or Popular Mobilisation Forces (PMF), and instead subordinated to the Ministry of Defence. However, a spokesman the General Commander of the Armed Forces, Major General Abdul-Karim Khalaf, denied the claim. Then, Sistani’s representative in Karbala, Sayyed Ahmed al-Safi, met leaders of the PMF groups known as Hashd-i Marja’iyya – this qualification is used to separate pro-Sistani groups from the pro-Ayatollah Khamenei Hashd-i Velayat-i – and addressed the latest developments related to these groups. Safi emphasised that the ideology and working mechanism of the PMF should be completely ‘national’: not only an open warning to Iran and its attempts to control the militias, but also revealing the depth of the division between Sistani and Khamenei on the question of the PMF.

The conflict between Najaf in Iraq and Qom in Iran is a long-standing rivalry over which stands as the centre of the Shi’a world, and from where authority should be derived. Whilst Khamenei advocates for the concept of Velayat-i Faqih – believing that religious authority should establish itself through political means – Sistani argues that religion and state affairs should be separated. During the reign of Saddam Hussein, Iraq’s Shi’a bastions were suppressed and Qom consequently gained more visibility and significance. As such, after the US invasion in 2003, Najaf aimed to overtake Qom in the battle for influence. Recently, the silent tension has continued to build between the two religious authorities, as has Qom’s determination to increase its political and religious activity in Iraq.

The pro-Iranian political parties, which became the second biggest bloc in parliament in the May 2018 general election, increasingly began to predominate among militia forces in the field due to their greater political influence, magnifying the tension between Qom and Najaf. After the killing of the PMF’s deputy head, Abu Mahdi al-Muhandis, with Iran’s Qasem Soleimani in a US airstrike on Baghdad Airport on 3 January 2020, the tension was ramped up. The fact that Muhandis’s successor could not be agreed upon until two months after Muhandis’ assassination demonstrates how tense the situation was. During this period, a delegation consisting of the leaders of four pro-Sistani PMF militias (the Abbas Combat Division, the Ali Akbar Brigade, the Imam Ali Combat Division and Ansar al-Marja’iyya) and under the leadership of Ahmed al-Safi met with the National Security Advisor and the head of the PMF, Faleh al-Fayyadh. During this meeting they demanded the PMF’s top positions be filled by pro-Najaf leaders.

Despite the Safi-Fayyadh meeting, Abdul-Aziz al-Muhammadawi (Abu Fadak), a top commander of the powerful pro-Iranian militia Kataeb Hezbollah, was designated the new PMF chief of staff – effectively Muhandis’s successor – on 20 February. Pro-Sistani militias within the PMF immediately rejected Abu Fadak’s appointment on the grounds that they had not been informed beforehand. Moreover, they pointed out that such a decision requiring legal regulation and such a decision could not be taken in the absence of a functioning government. It seems clear that this portends future resistance from Najaf to Qom over the PMF, with Abu Fadak having poor relations with pro-Sistani militia groups. At one point he was on the brink of armed conflict with these groups, with violence only prevented by the intervention of Sheikh Abdul Mehdi al-Karbalaie, Sistani’s representative.

Even though the pro-Iran groups tried force the decision over Abu Fadak without consulting the pro-Sistani factions, the decision was not officially approved. Qom had tried to ensure outgoing Prime Minister Adil Abdul-Mahdi approved Abu Fadak’s appointment before the end of his term, as it remained unclear whether any new prime minister would cooperate with the PMF. In a victory for pro-Sistani groups, PMF head Fayyadh was forced to concede that an independent decision related to the PMF could not be taken as the institution is subordinate to the prime minister’s office.

Before leaving office, Abdul-Mahdi imposed structural changes in the PMF by eliminating Muhandis’s vacant position, considered a move towards reducing Iranian influence. Iraq’s new PM-designate Adnan al-Zurfi, should he receive a vote of confidence, is also expected to limit the power of dissident groups within the PMF. Zurfi, who is close to the US, announced that ‘the gun should be in the hands of the state, armed groups should be disarmed’, with this being one of the reasons pro-Iranian groups opposed his candidacy.

The killing of Muhandis, a crucial pillar of Tehran’s proxy network in Iraq, caused chaos in Iranian military circles, which had planned for the PMF to be the dominant force in Iraqi politics, similar to Hezbollah in Lebanon. Pro-Sistani groups have sought to limit the influence of Iran by taking advantage of this turmoil, but for the moment the PMF continues to function effectively. If a new government is established, and the incoming prime minister does not approve Abu Fadak’s promotion, Najaf will have triumphed over Qom. Also, if Abu Fadak proves not to have the diplomatic talents of his predecessor, tensions within the PMF may deepen, and could escalate into open conflict. As Sistani himself is engaged in this process, Iran’s efforts to repair the cracks in its proxy network are set to be complicated. The fact that Sistani and the US have a similar attitude on this issue looks set to significantly restrict Iran’s room for manoeuvre regarding the PMF.

This article was published in LSE Middle East website under the title of “Sistani versus Khamenei on Iraq’s Hashd al-Sha’abi” on April 03, 2020.