What is the Background of the USA's Base Movement in Iraq? 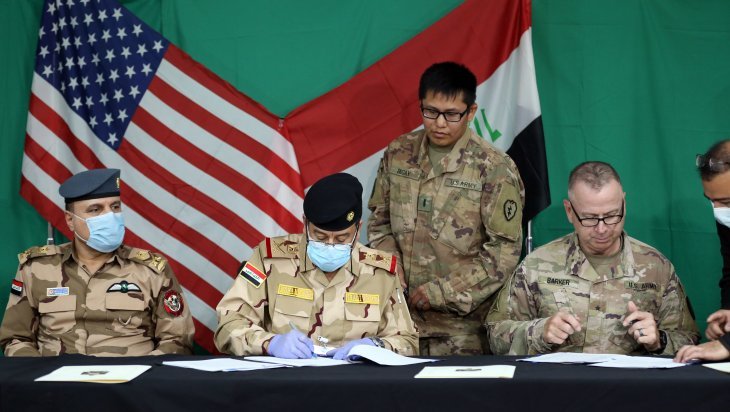 The United States-Iran competition in Iraq evolved from a controlled tension to open confrontation after the killing of Qassem Soleimani, commander of the Qods Force belonging to Iran’s Islamic Revolutionary Guard Corps (IRGC) and Abu Mahdi al-Muhandis, Deputy Chief of the Hashd al-Shaabi Committee on January 3. After that both Iran and the Iran-backed Shiite militia in Iraq threatened the American military presence in the country and the USA has repeatedly stated that it would respond to these threats by utilizing its military deterrence capabilities. The Pentagon holds the Iran-backed Shiite militia responsible for the Camp Taji attacks that took place on March 11, in Baghdad. American soldiers were killed in the Camp Taji attacks. Washington showed that it would not take a step back in its policies in Iraq against Iran and the militia forces by carrying out strikes against bases and depots of Qataib Hezbollah and killing numerous militia fighters. As tensions mount, the US declared in several consecutive statements that it has withdrawn its troops from some bases in Iraq, which were transferred to the Iraqi army. In this period, when tensions turn into confrontation, there are many discussions and projections pertaining to the reasons behind the decision by the US to withdraw from the military bases in Iraq. US forces withdrew from al-Qaim military base in Anbar on March 19, and from the K1 military base in Kirkuk on March 29 and handed over the control of these bases to the Iraqi army. The signals from the United States, that withdrawals will continue in the period ahead, leads to comments that these developments do not mean a total withdrawal from Iraq, but the US is restructuring and re-deploying its military presence in Iraq.

According to some claims that the American press attributes to Pentagon sources, the Pentagon has ordered the relevant commanders to initiate ‘planning for military operations’ against the Iran-backed militia groups in Iraq. The claims also include that, US Secretary of State, Mike Pompeo and National Security Advisor Robert O’Brien, who are the biggest supporters of an operation in Iraq, advocate that the current situation in Iran with regard to the Covid-19 pandemic is an opportunity for an operation. Considering all these claims, one can say that the Pentagon transferred the bases, which it deems risky to deploy, to the Iraqi army. That is because many Pentagon officials state that the heavy presence of Qataib Hezbollah around the al-Qaim military base puts the US troops there in jeopardy.

Meanwhile, the US actions for a withdrawal seem to be tactical steps since it does not reduce the number of troops in the country while transferring bases and redeploys the troops from evacuated bases to different spots in the country. It should be underlined at this point that, after the killing of Qassem Soleimani, the Ain al-Assad base that hosts US troops in Anbar was hit by fifteen ballistic missiles launched by Iran. This attack clearly shows the threat against the US military presence in Iraq by the Iranian ballistic missile capability. The US administration has started talks with the Iraqi government for the deployment of Patriot Air Defense Systems after the attacks. In this context, the first deployment of the Patriot batteries took place in the Ain al Assad base and the Harir base in Arbil. According to some rumors, two more Patriot batteries are stationed in the US base in Kuwait for further deployment in Iraq as well. Therefore, the transfer of bases and the deployment of Patriots may be interpreted as measures by the US to boost the security of its military presence in Iraq for a possible military operation. Furthermore, the US decision to withdraw from some bases might be instigated by its concerns to take precautions against uncontrolled attacks by militia groups such as Usbat al-Thaereen (League of the Revolutionaries) who assumed the responsibility for the Camp Taji attacks. From this perspective, a better interpretation of the aforementioned steps by the US is that the USA seeks to tactically revise its military presence in Iraq and assume a more secure position on the ground before it carries out military options and undertakes new actions against the militia groups in Iraq. In this context, the USA might seek to reinforce its position in larger military bases such as Ain al-Assad by withdrawing from smaller and unsafe bases on the grounds that the tensions with Iran will be localized further through militia groups.

After the statements by the US about a possible military operation and the deployment of the first Patriot batteries in Iraq, the way that Iraq will respond to these moves came to be a focus of attention. Iraqi Prime Minister Adel Abdul-Mahdi stated that any assault and combatant activity in Iraq that takes place without the consent of the Iraqi government will constitute a clear breach of Iraq’s sovereignty and they will hold the perpetrators to account. The way that Iraq will respond to the Patriot issue is another important point. Even though talks between the US and Iraq regarding Patriot deployment started in January, there is no official statement yet from the Iraqi government about a green light to the US. Moreover, Abdul-Mahdi emphasized that US reconnaissance flights in Iraq are ‘unauthorized’ activities. Therefore, in such an atmosphere, where the negotiations between the US and Iraq have not been fully clarified, the fact that the US has deployed the first Patriot batteries at the bases in Anbar and Erbil and that there are signals that this will continue show that the USA deems its new position in Iraq against Iran and the tactical revision brought by its redeployment as urgent and necessary.

Another possibility to consider regarding the reasons behind the American forces’ transfer of three military bases in Iraq to the Iraqi Army is that some political agreements may have taken place before withdrawing from the bases. While Adnan al-Zurufi, former governor of Najaf, who was assigned by Iraqi president Berham Salih, is known to have close relations with the USA, some Iran-backed political groups in the Iraqi Parliament (such as the Fatah Alliance, the State of Law Coalition and the Watani List) opposed al-Zurufi’s candidacy after the appointment. Considering the fact that the resolution of the Iraqi Parliament about the expulsion of foreign troops, particularly the American forces, could be utilized as a pressure factor against al-Zurufi, the USA might have sought to provide room for maneuver for al-Zurufi by withdrawing from the bases. Thereby, Al-Zurufi would be enabled to boost his hand during the government formation negotiations with the Iran-backed groups. Furthermore, his candidacy would have the chance to receive support from the Sairoon Coalition led by Muqtada al-Sadr, the largest group in the Parliament. Nevertheless, the Patriot deployment in Iraq casts a shadow over these efforts. The USA gives signs that it will maintain its military presence in Iraq and escalate the level of confrontation against the Iran-backed Iraqi militia groups by deploying Patriots in some bases. Furthermore, rumors that the Patriot deployment took place without the authorization of the Iraqi government might increase reactions against the USA and put al-Zurufi in a hard place during a government formation process.

In the recent period, there are discussions ongoing in the Iraqi public sphere that the American forces’ transfer of bases to the Iraqi army is a preparatory step toward an American-supported military coup in Iraq. According to the claims by some Iranian news agencies and social media sources close to Qataib Hezbollah, the USA may initiate a military coup if al-Zurufi’s government formation process is hindered. Considering the coup rumors, one should not forget that any coup is likely to drag Iraq further into a deep chaos and that it is questionable for the US administration to take the chance. That is because, an American-supported coup might fail while Iran’s current military and political influence in Iraq is maintained. An unsuccessful coup is likely to alter the balance in Iran’s favor leading to further questions about the US military presence in Iraq.

Other than that, some observers point out that the Iraqi army’s anti-ISIS operations being without the support of the Global Coalition against ISIS are closely related to the American forces’ withdrawal from some bases. Furthermore, American President Donald Trump might seek to give the impression that the withdrawal from Iraq, which was his campaign promise, takes place in accordance with his decisions. The current partial withdrawal may also be related to the upcoming US elections. Even though Trump plays a political game targeted at his domestic audience, a total withdrawal from Iraq does not seem realistic under current circumstances.

The course of the US domestic politics as well as the government formation process in Iraq will define the way that the steps to be taken in the period ahead will prioritize political initiatives or military options. That is because the US policy toward Iraq in the period ahead largely depends on the Trump administration’s appetite for taking risks in Iraq, under the circumstances of the growing Covid-19 pandemic in the USA. In other respects, the progress of Al-Zurufi in the government formation process in Iraq will be a defining factor. Despite the possible effects of these variables, one can argue that the US considers the Iran-backed Shiite militia groups in Iraq as an important threat against the American presence in the region and currently works on differing military options for eliminating this threat.